Because I Haven't Had Enough of The Winged Mice! I finished Fish Soup a day before I posted about it (review here) and yet I'm still peeking at it now and then for the mice. I'd still frame a print from this if it were available. As it is, I'm going to post some photos of the parts I'm looking at (though not all) because - winged mice! How can you not love winged mice? Or at least these winged mice. 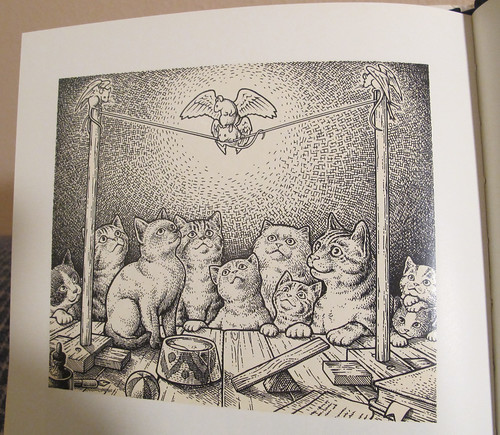 In that illustration the mice are part of a "Trained Mouse Circus," which I imagine was fairly easy to convince the mice to take part in as they seemed to enjoy being fed by people. The cats apparently "took great interest in" the circus. No reports of performers being eaten - we are left to wonder. But do take a look at the expressions on those cats. They are having...cat thoughts.

Here are some details from the one illustration I'd truly love to frame. It's large and takes two full pages, so it's tricky getting a photo. Also I'm too lazy to set up my tripod and proper lighting. So there is fuzziness. (The tint of the illustrations changes in these photos - there is a yellowish, parchmenty tone to all of them in the book.) 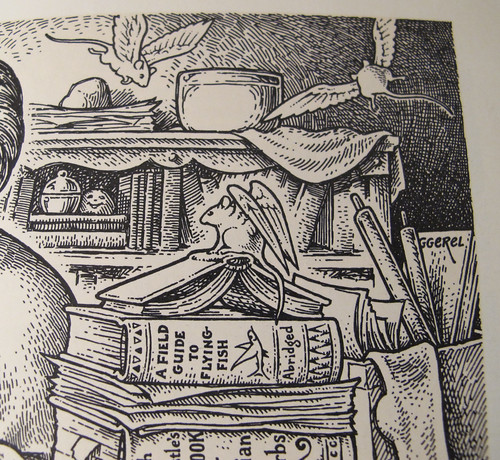 The mouse sitting on the book is listening to the conversation between the people. You can tell. Other books in the stack under the one on flying fish: Finch & Entwhistle's Big Book of Angrian Adverbs, KittyLit: A Treasure of Cats' Favorite Bedtime Stories, Something-something of Mouse Aviation, and Lorenzo Bean Goes Boating. 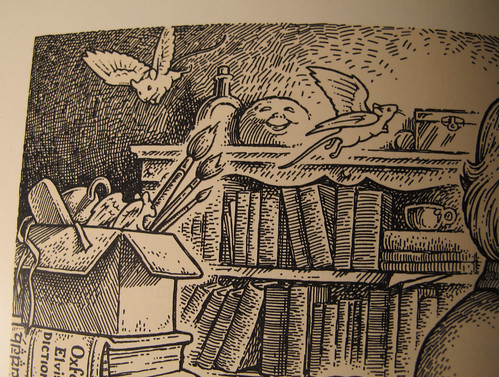 I'm fairly sure the mouse in the box is going to nibble on those paintbrushes. The book underneath that box is titled: Oxford Elvish Dictionary. Elvish and Tolkien being a specialty of the illustrator, Patrick Wynne. Also in that stack: Byways in Belmaire and Book-Binding for Awkward Writers (all the Rs are backwards).

Having now contemplated the idea of flying mice for several days I do admit there are several horrible things about the idea. Primarily the worst - mouse poop. I have had several mice as pets, so I know very well that these critters do poop at the drop of a hat. And get mouse poo everywhere if they get loose. That's aside from the problems of nibbling on the woodwork (and everything else) and being able to fly into cupboards and dive bomb into plates of food. So yes, it's a terrible, terrible idea in reality. Which is why it's SO much better in illustration, when I don't have to worry about cleaning. (I also love the idea that the character with the mice in her house doesn't bother to clean much. Again, because I don't have to live there.)

This picture has nothing to do with winged mice and I am only sharing it because... 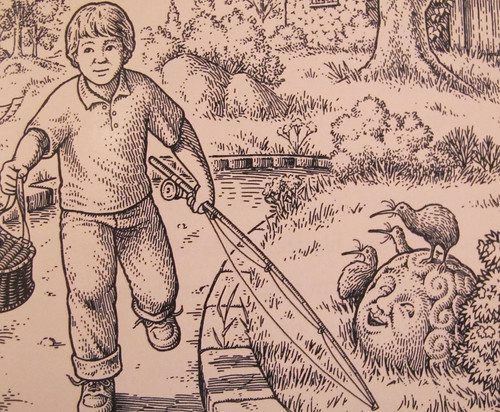 Unexpected kiwi mob! Hmmm. Now I have to go look up what a group of kiwi are called.

...Ok that's weird, apparently there's not a word for a group of kiwi. Er, the birds that is. Or that I can find via google.