Reading in Progress: Without Lying Down by Cari Beauchamp 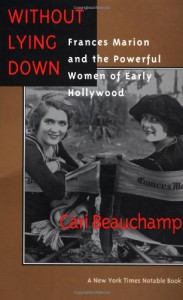 Once again I'm having fun with multiple-book-juggling! I now have three sometimes-overlapping book reading needs:

1) commute reads: reading for the train, can't be too engrossing or I'll miss my stop (I am NOT exaggerating about that),

2) evening reads: something I can put down easily so I can remember to get sleep, and

3) paper books that aren't portable and have to be read at home.

Without Lying Down: Frances Marion and the Powerful Women of Early Hollywood is in the third category because it's just heavy enough to be a pain to carry, along with all the other items I'm toting to and from work. At the moment it's also an evening read, but that's a problem because I'd classify it as almost too interesting.

[On the book cover Marion is on the right and the woman on the left is Mary Pickford.]

It's completely normal to have never heard of Frances Marion. The only reason I have is because I studied film history, and because I've read a handfull of books about women writers in the 1920s. Marion was one of many writers who wasn't exactly part of the Algonquin Round Table but was tied to it by living at the hotel for a time and by knowing some of the "members." (It wasn't exactly an official club.) She was also conscious that she wasn't really part of "that crowd" because her writing was often dismissed because it was only for film. Even today some people consider writing for film/television/etc. not "real" writing. (I am soooo into scare quotes suddenly, yerg.)

The one thing that you find over and over is how many witty, bright, and interesting women writers were involved in the magazine and film writing industries in early 1900s America. This isn't the first book I've read to posit that one reason women were able to be taken (somewhat, for the times) seriously in these fields was because of how disreputable the business was - women were let in because no one was taking those fields seriously. Because no one respected writers. There's a weird myth of that being a respected career, and that's never been the case. There's a very narrow field of Writers of Literature that got some respect, as well as certain types of academic writing - but there were thousands of other writers making a living who weren't considered valuable members of society, or even artists. And whose names we don't know today. If you think anything has changed, go read interviews of writers working in the film and television industry. Not the ones whose names you've heard of - again, that's a very small, select group. Most screenwriters are rarely are known by name and are just as disposable to the studios now as those writers in the 1900s. Something doesn't work? Fire the current writer and bring in someone else.

What I love about Marion is her attitude. She can do it all - write, direct, produce, edit - and she chose writing as the thing that made her happiest. (Since she was pretty they tried to nudge her into acting - which she always knew wasn't her thing.) She kept control of her career by not signing up with just one studio, and instead freelanced so she could choose who she worked with and what projects. She managed to become one of the best known screenwriters of the time - a recognized name in the fan magazines and newspapers.

I haven't yet read to the part in the book where the entire film world undergoes a Big Change with the coming of sound. It's one of those earthshaking industry moments - like television suddenly competing with film (and film fighting back) or mp3s changing the entire music industry (and the music industry fighting back). I honestly love reading about these moments because

1) everyone in the industry always flips out about them initially (in extremely dramatic ways, because careers suddenly undergo massive change, businesses rise and fall, etc.) and

2) each one always makes the media more interesting for consumers and more complex for scholars/workers in that field.

And I do love a good, meaty history-of-tech story.

Oops, this was all leading up to a quote from the book - got a bit carried away with history squee. Well, I'll just pop that in after the break.

(Also WTF is this one week it's snowing us in and the coming week it's going to be 60 degrees?! And here I thought I was being overly careful bringing some summer clothes along with me. The US east coast is winning the changeable weather award - given by me - over west coast - well, for this season anyway.)

Background to the quote - writers are working to adapt The Scarlet Letter for the screen but have the problem of working in the adultery part without upsetting the public and the still-fairly-new Hays office, which was in charge of movie censorship. (Wikipedia: Will H. Hays, and Hays Code/Motion Picture Production Code)

Remember, these are silent films, so everything has to be told with acting/gesture/expression and very short title cards. So the writers are writing basic plots and lots of stage directions.

“Desperate to give Dimmesdale’s love for Hester and their child “legitimacy,” the writers had turned creative. One opened the story in England, where Hester and Dimmesdale have known each other since childhood and are separated by a cruel act of fate “which drives Hester into a loveless marriage and Dimmesdale into the Puritan ministry.” Another proposed that Pearl was the child of a secret marriage between Hester and Dimmesdale when they thought Hester’s father was dead. It was even suggested that Pearl be Prynne’s child, whom he refused to  acknowledge “to punish his wife for being unfaithful to him in thought if not in deed.”

The quintessential example of the length they were willing to go to please modern-day puritans was Wyndham Gittens’s suggestion that they get around the meaning of the letter A on Hester’s breast with another “term of reproach less shocking than adulteress or, failing a suitable word, by the change of the symbol to another letter which will permit of this envision [sic.].” All the scenarios proposed happy endings with “Pearl happily walking down the street with both her parents” or “all three sailing away on a ship.”

[Author Beauchamp goes into why the book’s story is important, which is where Marion steps in - she read the book and understood what it was really about, and thus what parts were filmable.]

….it is the evolution if Reverend Dimmesdale’s guilt, not the actions of the characters that makes the book a classic. So much concern was given to how the story could be told without the censors interfering that little attention was paid to the fact that the structure of the book gives few aids to putting it on screen.

Frances’ solution was to open The Scarlet Letter with scenes and camera directions to establish sympathy for the conflicts Hester faces. …

...Frances’ The Scarlet Letter is no longer an evolution of Dimmesdale’s conflicted path to confession; this is Hester Prynne’s story.”

Of course this also makes more sense if you know that the character of Hester was from the beginning to be played by Lillian Gish, who personally went through a lot of the censorship hurdles to see that the film was made. (It had been on the "no, no one can make a movie out of this ever" list.)