Reading in Progress: Bedlam: London and Its Mad 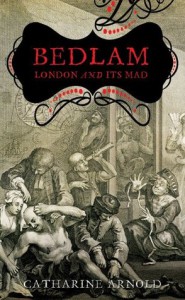 Oddly I can't find the ebook on Amazon at the moment. Wonder what's up with that. This is another one I'm picking up and reading in bits - not out of losing interest, but frankly because it's history that works well with that. (And that's important for reading on a bus/train commute.)

And this was one of those moments that made me say, "wait what?! I have to reread that..." So of course, had to share. Because I was not expecting this kind of story:

"In one notorious account Sprenger and Kramer even claimed that witches possessed the power to remove a man's genitals, collecting 'as many as twenty or thirty members together,' and putting them in a birds nest, or a box, 'where they move themselves like living members and eat oats and corn, as has been seen by many as it is a matter of common report. One witness reported that when he had lost his member, he approached a known witch to ask her to restore it to him. She told the afflicted man to climb a certain tree, and that he might take which he liked out a nest in which there were several members. And when he tried to take a big one, the witch said: you must not take that one, adding, because it belongs to a parish priest."

Which reminded me of an apparently still common type of mental illness, along the same lines: Koro or genital retraction syndrome. Which makes a slight bit more sense than the "it's gone missing!" thing.

Yeah, not at all what I thought I'd be pondering on my way to work the morning I was reading this. Heh.