Reading in Progress: The Yellow Kids by Joyce Milton 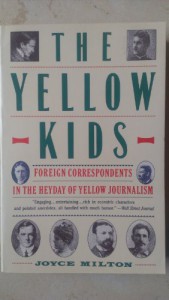 Some background - so I'm out of town checking in with family this week and fun, I have brought this allergy or cold or whatever it is with me. Which isn't a problem because they've had allergies the past two weeks and are just getting better. Which means we are, combined, a room full of sniffling and throat clearing and the need for tea and cough drops. Ah well, at least I have a week to crash in because the To Do list wasn't that long this trip anyway. (Aside from tomorrows exciting dentist check up, whee.)

Anyway, this is a great time for me to finish up the ebooks I've been reading, right? Of course not! Of course I'm going to pick up one of the paper books on the physical TBR shelf instead. And I predict the usual will happen - I'll not be able to finish it in a week and will end up taking it back with me, and then grumble over luggage space.

This particular book is one that I used back in the dark ages when I taught and needed some extra stories to enliven a lecture. Textbooks often leave those out, which is a shame because 1) they're fun bits of storytelling and 2) I recognize the value of these sorts of stories as helpful in keeping students awake during what can sometimes be sleepy bits of history. (Sadly not everyone is thrilled by journalism of the 1800s. I accept this.) But because I only used portions of this book I never sat down and read the whole thing - I just used bits of it. Which happens a lot in academia when you have loads to read and little time. (Just like all of us and the TBR list, only it's part of the job.) So this is a seriously belated read.

So I'm about to quote a chunk of this for two reasons (yeah, I go into teacher mode and I go all listy, mainly because students have always paid attention to lists, so it happens naturally - that didn't just become an internet thing without reason) -

1) I really think people forget that the US press has always been full of mudslinging, because people continually have this idea that it's worse now than it was in the good old days and

2) seriously, these are great stories. Notice I keep calling them stories and not just history? You'll understand why in a minute. This is historic stuff, but it also is completely in the world of gossip - and I think we all know how reliable gossip is. It does get into the history books - but good historians will alert you to the fact that a lot of this isn't exactly verifiable.

"After the Revolution, party mouthpieces like Phillip Freneau's Gazette and Benjamin Franklin Bache's Aurora lambasted President Washington as a would-be dictator who conducted himself "as if he were the omnipotent dictator of a seraglio," a thief who stole from the public treasury by overreporting his expenses, and a traitor (for making a treaty with England). Federalist papers like the Porcupine's Gazette and Alexander Hamilton's Evening Post replied in kind, accusing Thomas Jefferson of paying bribes, perjuring himself, and keeping a slave mistress, Sally Hemmings."

[Note: in the world of the time, referring to the seraglio was making an overt sexual slur. It wasn't subtle. So about on the same level as calling someone a traitor, with the added gasp-sex-is-mentioned part tossed in.]

That's a short version. If you really go into it (and there are loads of histories that will) there were a lot of things written about the Founding Fathers that sound a lot like the folk who huff about dictatorship now. Actually there's rarely been a president that someone hasn't tossed the dictator card at - even during say, World War II when the rest of the world had a bit more experience with what living under a dictatorship really involved.

[Historyish aside: Note that I'm not discouraging criticism of those in power - just that Americans now often seem really bad at doing this as far as knowing the definition of the words they're using. Or conversely, they're really great at throwing words around that they know are exaggerations, because, politics. However you could definitely make the case that using the word was justified in arguing over the Alien and Sedition Acts. But then, at that point in time no one anywhere wanted their country to go the way of the French Revolution, so there was quite a bit of overreaction on all sides.]

About to quote a lot of bits about James Gordon Bennett, founder/editor/publisher of the New York Herald, but I think you'll see why.

"...Bennett sent reporters to cover crime and court proceedings, and he regularly published society news, a practice condemned as vulgar.

...He violated the taboo against referring to undergarments by name by printing the word petticoat, and was denounced in return as a "pestilential scoundrel."

...President Lincoln, at one time or another, was branded by the Herald as a "traitor," an "imbecile," and a "smutty joker," and on the eve of the Civil War, Bennett's sarcastic suggestion that the middle states ought to join the South in secession, leaving New England to enjoy its righteousness in solitude, resulted in the Herald's offices nearly being burned down by an outraged mob.

...In 1836, James Watson Webb, owner of the rival Courier & Inquirer, became so outraged over a Herald story accusing him of profiting from the stocks he touted in his editorial columns that he attacked Bennett on the street. Striking Bennett from behind with his cane and knocking him to the ground, Webb then held his victim's jaws open and spat down his throat. Bennett, unimpressed, resumed his attacks on Web as soon as he was well enough to return to office. In 1850, John Graham, a defeated candidate for district attorney whose election the Herald had opposed, accosted Bennett on Broadway, and while Mrs. Bennett looked on, he and his two brothers flailed away at the publisher with horsewhips."

With those two samples of what life was like with Bennett it's not a surprise that his wife eventually took their children and moved to France.

It's also not a surprise that Bennett's son - James Gordon Bennet Jr - also had an interesting biography. (I really need to dig up a bio on just this family sometime - I feel sure someone's written one because read on...)

"...In 1877, however, Bennett [Jr]'s career [at the Herald] was cut short when he committed the most notorious faux pas in the annals of New York society. While paying a New Year's Day call at the home of his sweetheart, Caroline May, he overindulged in champagne and relieved himself in the fireplace - or according to some accounts, in the grand piano. The next day, Miss May's brother accosted Bennett on the steps of the Union Club; there was a fight, followed shortly by a duel, during which Fred May purposely fired into the air but Bennett tried (unsuccessfully) to mortally wound his opponent. Curiously, the May family was willing to forgive and forget; it was Bennett who held a grudge. Abandoning New York forever, he retreated to Paris where he lived the life of a fabulous eccentric, drinking prodigiously, terrorizing editors from afar, and indulging his obsession with owls by dreaming up owl-related stories that inevitably received prominent coverage on the Herald's front page."

[Bookish aside: I would definitely read a book titled The Most Notorious Faux Pas of History. Which would be confusing because that's the plural form of faux pas (same as singular, only pronounced differently so you can't tell by looking at it) and it'd drive editors wild and would have to be re-titled.]

So the takeaway - beside the fact that the history of the NY Herald is fun - is that the press has never held the US President or politicians in awe, and the 1950s period of not reporting gossip about them was the aberration, not the norm.

Also the press has never been a place full of 100% college educated, scholarly writers who only wanted truth and accuracy in reporting. There were a few of those types here and there, but mostly it was all about selling papers and getting the story before the other papers did. This has always been true - because it's a business and thus about money making - the written word was just the means to that end. Journalists were never a socially admired class - and few authors were either. It's no more a noble and "gentlemanly" field than baseball was/is a "gentlemanly" sport. (Seriously, the sport had that rep once, even though it's a game where players purposely attempt to hit/injure others with the ball. So very odd.)

But man, journalism history is SO full of completely bizarre stories. If anything, during the 1800s newspapers and their writers were epic at stirring people up.