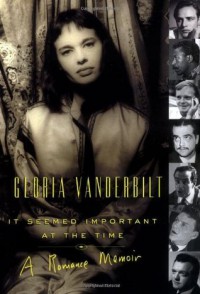 I'm easily sucked in by book sales - and in this case didn't notice that the book is only 180 pages. However I feel somewhat badly for the star rating, because Gloria Vanderbilt has indeed been through some huge personal traumas. Starting when she was involved in a child custody fight between her parents, which was covered in detail by the media of the 1930s. And it was the usual "how much do any of these people really care about the kid vs them wanting to control her money?" She went on to date well known folk in Hollywood, attempting an acting career, to making (maybe expected?) bad choices of husbands, having her money stolen by her therapist and his lawyer friend, and having her son commit suicide.

Vanderbilt does not dwell long on these tragic moments - she explains briefly, and then moves on. She remembers what she wore at all times - which is humorous in that she ended up making her money back by licensing it to various types of fashion. She has many cheerful, optimistic things to say about moving on, recovering from divorce - but doesn't go on for pages and pages. And she never feels sorry for herself.

At the same time there doesn't seem to be much depth here, and the writing is what I'd call, er, fluffy - but I can't really say that I can fault her much in that she's covering a lot of painful topics, and seeming to be honest about them. I don't really feel good about being too critical of that kind of autobiographical material. And on the plus side I think if there was a ghost writer involved they were light handed with the rewriting.

Oh she's also Anderson Cooper's mom. I saw clips of an interview sometime recently (for the new book they wrote together) where she was being asked about various things in her life and then it would cut to Cooper who would say things like "mom, how could you trust [con men who stole her money] without question?!" - which is exactly what you want to ask, it's that unthinkable that she'd basically sign away all her money. This is a very trusting and oddly naive woman - but then from this book you get the sense that she's always been that way. Despite things that people do to her she always seems to trust that most people are good and will treat her honestly. Which I can't interpret as sweet because in her position in life, it's been repeatedly dangerous for her to act that way.

Anyway, it was interesting. Don't recommend you rush out to read it though.