Currently Reading: Crainioklepty, and Reading At Your Own Pace 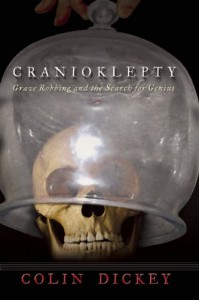 I used to spend a lot of time beating myself up over not being able to stick to (what I assumed everyone did) the pattern of starting a book, churning all the way through and then finishing it - without stopping to look into/read other books. See, I just did it there - I put "look into" rather than admit that yes, I stop and pick up another book to read at the same time. It's taken me a long time to get used to the fact that not only am I really good at figuring out that I'm just not in the right mood to have fun with a certain topic or writing style, I'm also going to enjoy reading more if I'll actually listen to that and then return to a book in the right mood.

Also it's excellent for allowing a book to surprise you.

Crainoklepty is a book that most folk who know me - or have seen my apartment (when not all of it was in storage) - would say is definitely up my alley because yes, I love skulls. I have loads of them - er, all decorative and none of them real. (I'm not opposed to real - just requires more upkeep, and also - breakable. I like plastic.) I usually strew them about the place because if they were all placed in one area it would look a bit weird. But in amongst plastic lizards and action figures, it doesn't look as intimidating. (Well, not to me anyway.) So a book all about skulls isn't just something I want to read - if I had shelf space I'd want a nice hardback of it to display on a bookshelf.

However I'm the sort of person that likes the variety of skull artwork, and am into the idea of the skull on the medieval scholar's desktop sort of decor (it's what you were to meditate on with thoughts of carpe diem). This is a book about people who are obsessed with the real thing, and (so far as I've read) obtaining the skulls of famous people.

I set this book down after getting burned out during the part where a famous local singer's head was stolen - by people that knew her in order to remove the flesh and keep the skull. And the process was gross, the science was bad, and the result was a skull that didn't "keep" well, shall we say. And at that point I was spending way too much time thinking about "how could you do this to someone you knew, and look at that head as it decomposes and..." - yeah, you can see where this is one of my set aside, more later times. I read horror and such, and when I'm in moods where I fall into this kinda questioning, it's a sign that I'm not going to walk away with happier thoughts. (Oddly, I'm fine with stories of monsters. It's the humans, and historical humans that give me problems.)

Anyway, I picked the book up again and have been enjoying the section of phrenology. If you've never heard of phrenology, oh do you have some fun in store - this is one of those weird fads of science that still occur - and can be boiled down to the idea that the bumps on your skull indicate the kind of person you are. And people took it very seriously. Interestingly, it wasn't quite as whacked as it become - the inventor, German doctor Franz Joseph Gall, tried to make that clear apparently:

"...he was accused by the Viennese authorities in 1802 of attempting to distinguish "the worthless and the useless from the virtuous" by the shape of their skulls, Gall replied that such a thing was impossible "because moral, social, civil and religious conduct, is the result of many and different concomitant causes, and especially many external influences..."

However when pherenology was picked up and spread by Scottish lawyer George Comb - well, I'll quote from the same page, discussing the written document (the back and forth between Gall and the Viennese) in the quote above:

"In his English translation of the document thirty years later, Comb added the footnote: "This was written in 1802. I consider it quite possible, in the present state of Phrenology, to distinguish the naturally worthless and useless from the virtuous by the shape of their skulls.""

You can get an idea of why this was problematic/dangerous - it's along the same lines of "I can tell a person's intelligence by the size of their head and/or how they look." (The fact that you continue to hear this kind of talk today isn't heartening. Thankfully it's now without any reputable science backing it.)

The reason I already know a chunk about phrenology is that it comes up all the time in books of the early to mid 1800s, which I had happily read chunks of for high school and college. You might not realize it until confronted with quotes, but once you start seeing them, descriptions of peoples' head shapes are seriously all over the place - Dickens, Bronte sisters, etc. etc. And it was done on purpose, so yup, well worth picking apart.

Marian Evans/George Elliot was another fan - she was told many flattering things about her own skull.

"...In works such as Adam Bede and Middlemarch Eliot created a new mode of depicting the inner consciousness of everyday people. And, particularly in her fiction, phrenology was an important tool for accessing that inner consciousness. ....In the early Scenes of Clerical Life, we are introduced to Lawyer Dempster, who is "weighed down" by "a preponderant occiput and a bulging forehead, between which his closely clipped coronal surface lay like a flat and newly-mown table-lawn." Astute phrenologists would have immediately recognized the selfishness of such a character, a "preponderant occiput" indicating an overdevelopment of the faculties of approbation and self-esteem. Likewise his flat "coronal surface" would indicate a developed intellect but lack of veneration, conscientiousness, and benevolence."

It's actually a trend that no one you ever read gush over phrenology was ever told that theirs was a poor example of a skull, and obviously they weren't intelligent or virtuous. The skulls of famous people - talented artists, politicians, etc. etc. - were always shown to have the wonderful properties that you'd expect, knowing their lives and talents. There weren't any experiments along the lines of "here's a skull, tell us about the person." - that I've found anyway. If you see parallels between palm reading, tarot card reading, etc., you're in the right, this is similar.

Then again, I could go on a long tangent about the weird areas the field of psychology has drifted into throughout its history, and this post would go on and on. Social sciences are fun like that. (But I would say that, I've got a social science background.)

Anyway, I'm having fun today picking up the books I feel like reading. And remembering how much fun it is - even decades away from school assignments - that I'm free to start and stop reading whenever I feel like it. So weird that I used to long for days like this back when I had to rush to finish a book - and now my problem is forgetting that there's no need to finish or rush if I don't want to, there's no longer an assignment!

love of skulls phrenology in praise of stopping and starting reading