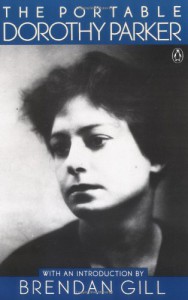 Once upon a time I had this idea that one should read a book from start to finish, and if one was being particularly through that included the preface and any appendix. However that technique has often left me hanging in one part of a book (really wishing that I was reading another part, farther in) - and if it's a book of collected stories and poems, it's not really vital that you go in order.

I've also begun reading this book more than once and ended up hopping about and only reading bits and pieces. So this time through - and I do intended to finish the whole of it this time (yes, really) - I went straight for the part I was most interested: the reviews of plays and books and other articles. I only wish there were more of these because Parker is such fun as a reviewer. More than once I've read a bit and laughed in agreement. Such as:

p. 420  "...There's only one thing I could wish about the whole play - I do wish they would do something about those Russian names. Owing to the local Russian custom of calling each person sometimes by all of his names, sometimes by only his first three or four, and sometimes by a nickname which has nothing to do with any of the other names, it is difficult for one with my congenital lowness of brow to gather exactly whom they are talking about. I do wish that as long as they are translating the thing, they would go right ahead, while they're at it, and translate Fedor Vasilyevich Protosov and Sergei Dmitrievich Abreskov and Ivan Petrovich Alexandrov into Joe and Harry and Fred."

And that nicely sums up why I could never finish The Brothers Karamazov - I made the mistake of putting it down for a day and when I tried to pick it up again I was lost and unable to figure out who was who. I probably would have had to keep a cheat sheet of names to properly keep track, and so gave up and moved on to other books.

Here's a later review, to give you another idea of why I turned to these first. Here Parker confesses to be "a confirmed user of Whodunits":

p. 568  "To me, the raveled sleeve of care is never more painlessly knitted up than in an evening alone in a chair snug yet copious, with a good light and an easily held little volume sloppily printed and bound in inexpensive paper. I do not ask much of it - which is just as well, for that is all I get. It does not matter if I guess the killer, and if I happen to discover, along around page 208, that I have read the work before, I attribute the fact not to the less than arresting powers of the author, but to my own lazy memory. I like best to have one book in my hand, and a stack of others on the floor beside me, so as to know the supply of poppy and mandragora will not run out before the small hours. In all reverence I say Heaven bless the Whodunit, the soothing balm on the wound, the cooling hand on the brow, the opiate of the people."

The Parker who writes poetry and short stories almost seems a different person. Reading too many of those pieces makes me feel somewhat depressed - or at least feeling a bit too full of the angst of love and loss, or of really horrible people who seem to pop up regularly in her short stories. I'd enjoy her writing more if I could read it all in chronological order and have the reviews and essays as relief. But I do understand the why of the ordering - the first section is how Parker herself grouped her works, and the later was added after her death.

At least if you read all her reviews last you'll be left with the more lively person who's just shared her thoughts on a play or book. That's the Parker I think I like most.

[Here I go off on a tangent. Just noting.] When looking up the word mandragora, wikipedia helpfully pushed me over to the page on mandrake - which seems fair because it probably wasn't the demon or the band. Anyway. Under in pop culture this caught my eye:

"...Not poppy, nor mandragora,

Nor all the drowsy syrups of the world,

Shall ever medicine thee to that sweet sleep

Parker was wonderfully well read, so I can't think this is a coincidence. But that's just my guess, seeing that the use of mandragora probably doesn't pop up all that often. Now of course I should go reread Othello and see about the context of that quote.