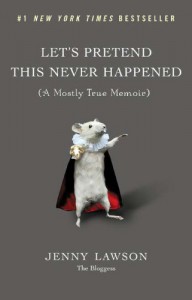 Once upon a time I thought I'd read the Dorothy Parker biography over the holidays but two things happened:

1) I had no idea how many times I'd be interrupted by conversations, discussions on what everyone else was watching on tv, and suggestions that everyone come here and eat thing X and

2) this book went on sale for some ridiculously low price (something like $3) and I said, why yes, I MUST buy that now.This is a MUCH better book to read in starts and stops and I am sincerely thankful. I've also been quoting many, many bits via my cell phone (while my husband reminds me that he was going to get me a tablet to do that on but no, I wanted a kindle). (I may have picked up Lawson's habit of explaining a lot of background goings on.)

Also I've read Lawson's blog on and off and was expecting this book to be something I'd feel I'd already read before - and I was totally wrong and am enjoying it immensely. This may have something to do with having parents that live in San Antonio, and relatives that live in east Texas, so I've been both a visitor and resident of this state and am pretty familiar with a lot of the weirdness. Well, the state weirdness. Lawson brings her own kind of weird to the table.

Currently I have kicked my father off his computer to write this since for some reason I can't type a review on the GoodReads phone app (what ARE they thinking with that?!) because I had to quote the following:

(37% in) "...Sadly HR has very little power in an organization unless the real executives are on vacation, then watch out, because a lot of assholes are going to get fired.

There are three types of people who choose a career in HR: sadistic assholes who were probably all tattletales in school, empathetic (and soon to be disillusioned) idealists who think they can make a difference in the lives of others, and those of us who stick around because it gives you the best view of all the most entertaining train wrecks happening in the rest of the company."

I had to read this aloud to my dad after which we immediately began swapping stories of people in HR, because everyone has those, right?

...Can not stop quoting! This actually was a great thing for me during the vacation because whenever I was interrupted in reading I could stop and add a quote. Sometimes while carrying on a conversation. This was probably terribly impolite but in my family we almost always have our noses in books, so it was actually normal. Sort of. There are more quotes I would have added from the airplane on the flight home if they allowed me to turn on my phone while waiting for take off. Oh well.

Anyway, another quote, because I once had scorpions (mothers with babies on their backs! argh!) in my house as well:

(86% in) "...The scorpions have all left the attic. For the house. I'm ordering a flamethrower to keep beside the bed. ...I still shoo spiders and moths out of the house with plastic cups, but these scorpions are going to die painfully."

I used to hit my scorpions with a hammer (because I really hated them) until I found out that this got more scorpion blood on the carpet. Scorpion blood is hard to get out of carpets.

There's a lot in this book that I wonder whether can be as funny if you don't live in Texas. Because this bit makes perfect sense to me:

I would actually distrust someone who said it was their job to rid your home of pests who had no clue what a chupacabra was. Especially if I lived out in the country. In Texas.

I should mention here that Lawson is balancing all these humorous remarks with discussions (and examples) of her serious mental illness, not to mention health problems, and yet she's not dull. And there are serious moments, but you don't feel depressed after reading about things - though the chapter with miscarriages was hard. That last bit isn't a spoiler because she tells you what's coming in the first paragraph and it's nice to have that warning.

In fact now I feel like I completely didn't see the entire person behind her blog (http://thebloggess.com/). I had this idea - after a few cursory blog readings - that she was this self assured, kickass, confident, blog celebrity-comedian - and that's not her at all. Well, the kickass and celebrity-comedian bit are, but she has insecurity like nobody's business, and I have a good chunk of insecurity myself and feel like a decent judge of this. And a lot of her stream of consciousness writing is meant to mirror her thinking process - and you understand that a LOT better after reading this book.

"...Then in January you complained that your computer wasn't working properly and was acting 'all squirrelly.'"

Am making a note of this because my husband refuses to believe that I did not make up the word 'squirrelly' and that many other people, mostly Texans, actually use it. Possibly outside of Texas too, but I've only ever heard it there among my family. It apparently doesn't add anything to my case that it's defined on many different websites - he still refuses to admit that it's used by other folk and not just me. So noting this usage here for future reference. Not that this will help, but still, a reference. (I showed it to the husband, he said that I'd somehow inserted the word into the book. Humph.)

IMPORTANT! If you get the ebook version of this be prepared for peering at tiny, tiny photos and working on making out the tiny print on them. They really need to look into enlarging them a bit.

...I had a hard time deciding on the stars here because I was all ready to put this into 3 star territory for books I like because I couldn't see this going into 4 stars because I'm not deeply certain I'll reread this again. But! Then I remembered that this actually made me laugh out loud multiple times (and not at the parts I probably should laugh at, so I'm not sure how this will relate to others and their book reading) - and I do not usually laugh out loud at books, I'm more the smile-while-reading type. So for that, it's 4 stars. Definitely.

Also boosting it to the 4th star was the taxidermy. Because even though the photos were tiny the descriptions were enough to put me there. And I do enjoy a good taxidermy description. (Especially of that alligator. And Hamlet the mouse.)