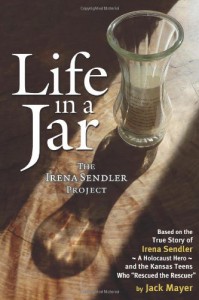 Hey there - Batgrl here for this first bit, before the *** marks.

I just have to share another part of the Sendler story. In 1999 three high school girls from Kansas wrote a play about Sendler. (Also read their FAQ.) Their teacher and the community didn't stop there with the project - read the rest at that link. A lot of the US realization of who Sendler was and what she did resulted from that play, which was performed in many places, and resulted in a book and (in a roundabout way) a Hallmark Hall of Fame film. There's also a list of Sendler facts at the end of that page - because you know how the internet can get the story confused. (I've seen some inaccurate facts about Sendler's story passed around via tumblr images.)

I'm more apt to believe that page simply because the people involved in the project traveled to Poland and interviewed various sources (people directly involved) to obtain updated information (and the website documents a lot of it - multiple pages, photos, etc.). But it's also clear that those involved are really passionate about telling Sendler's story. Example from info at the end (in which you can guess what the bad info was being tumblr-ized - some of the following corrects the jpg that follows):

"***Numerous internet websites have posted much incorrect information. Irena was not German, She didn't know the Nazis' plans, She was not a plumbing specialist (she was a social worker), Most of the children saved were not babies, She used a tool box several times at most,The truck wasn't hers, Her legs were fractured-not broken, Her arms were not broken, The dog was only used a few times, Her name was Irena not Iliana and there are several other mistakes. The Nobel Peace Prize is given for achievement during the past several years, Irena knew this and asked not to be nominated. The Nobel Committee encouraged her nomination to give her more recognition. She was a big fan of Al Gore."

[The following Reblogged form Derrolyn.Booklikes.com] Don't feel bad, Malala, the Nobel prize ain't what it used to be...

asked not to be nominated for Nobel Irena Sendler reblog Sendler jpg here not all fact
Source: http://derrolyn.booklikes.com/post/593272/taliban-very-good-news-malala-didn-t-win-nobel-peace-prize