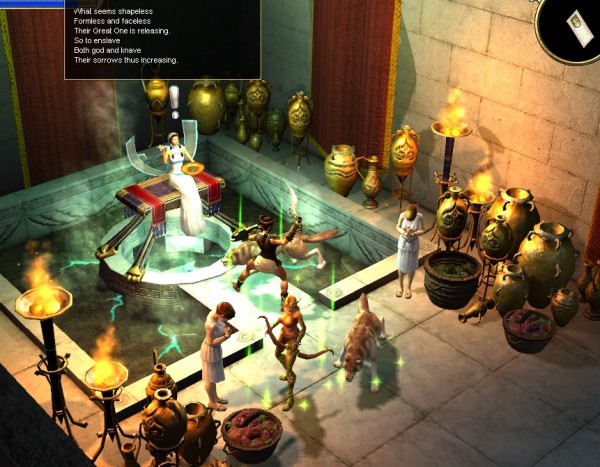 Screenshot from Titan Quest immortal Throne: Chatting with the Oracle at Delphi

So last you heard from me I was babbling about playing an old game, and that's pretty much where I still am. The holidays have been a lot more stressful (I move cross country in 16 days), and when I try reading most of the time I end up rereading the same paragraph (before realizing that I'm doing that). So the solution has been video games and comedy podcasts. Which has helped.

This shot is one of the reasons I like Titan Quest - you can tell that the developers did indeed do some research. There's always been a lot of questions about the Oracle at Delphi and how she entered the trance to deliver her riddles/prophecies. And one theory has been that natural gas emissions in the temple caused hallucinations, that might have led to prophecy. It's a theory anyway.

Delphic Oracle's Lips May Have Been Loosened By Gas Vapors

"...The study, reported in the August issue of Geology, reveals that two faults intersect directly below the Delphic temple. The study also found evidence of hallucinogenic gases rising from a nearby spring and preserved within the temple rock.

"Plutarch made the right observation," said Jelle De Boer, a geologist at Wesleyan University in Middletown, Connecticut, and co-author of the study. "Indeed, there were gases that came through the fractures.""

The game was made in 2006, and so you have the interior of the temple and the gas vapors coming from those blue cracks in the ground under the Oracle. I'm sure there's oodles of inaccuracies around the game, but honestly I'm mainly in there to kill mythical monsters, collect loot, and enjoy the random scenery. After you go past Greece you're sent to Egypt and Asia. In each area armor drops that is more suited to the costume styles of that country - the humor for me is ending up with incredibly horrible mismatched gear style, which you have to keep because the stats are so good. ....But still, that moment where I entered the temple and realized someone had read up on the setting - well, that was fun. (There are also storytellers here and there that spout bits of mythology, some stories somewhat lengthy, and all with voice actors.)

Oh right - in the screenshot my character is playing a Ritualist, a combination of two classes. Short version is that she summons oodles of minions: wolves and an archer at the moment. Which means that the screenshots are always a little crowded as the wolves bumble around all over the place if you stand still too long. (They get impatient.)

The Oracle herself is launching into a long poem that runs countless stanzas - a prophecy which only makes sense as you complete the many quests on your journey. It doesn't really tell you anything you can solve beforehand. Here she's saying

Their Great One is releasing

Both god and knave

You can see that this isn't terribly helpful - which is probably what most people felt about the Oracle's words back then.

Later: one more story I have to add a link to, vaguely related because gases are involved here too:

"... Mount Olympus was a real mountain on the Greek mainland; presumably you could visit the home of the gods if you hiked up high enough. And if you went far enough the other way, amid the active geology of the Mediterranean and its many volcanoes, a few sulfurous openings in the Earth promised access to the underworld.

Now Italian archaeologists working at the Greco-Roman site of ancient Hierapolis (modern-day Pamukkale) in Turkey have uncovered that city's gate to the underworld. Pilgrims from around the classical world came to Hierapolis to bathe in its hot springs and worship at the Ploutonion—a temple precinct built over a cave and underground thermal area.

...The eunuch priests of Pluto would prove their power by entering the gassy cleft and coming out alive (presumably by holding their breath and taking advantage of known pockets of safe air within the cave), while birds that flew too close were often felled by the poison. During the modern excavations, dead birds at the site helped convince the archaeological team they'd found the Ploutonion's actual "gate to hell.""

That bit bolded because - well, imagine you're at your job, digging in the ruins, and suddenly all these birds start dropping dead...