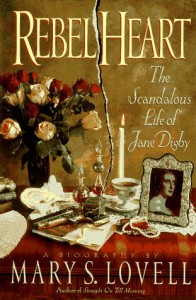 One of my most favorite Moments of Squee: when an author uses the prologue to tell the story of the research behind the book. I adore tales of lost books, undiscovered manuscripts, hidden drawers in old desks that reveal old letters, dusty shelves in libraries with forgotten books - you get the idea.

I'll get back to the forgotten texts bit - but first, the women in question!  I have a long list of women whose biographies I want to read (that I mentally file under Women I Wish Had Been In More History Textbooks), and I've finally gotten around to Jane Digby. Here's the way Rebel Heart describes her life on the book jacket:

"Jane Digby (1807-1881) had everything: beauty, aristocratic connections, money, and, as revealed in her letters, poetry and intimate diaries, a highly original mind. Said to be the most beautiful woman in Regency England, she was married at eighteen to an ambitious politician twice her age, and at twenty-one was involved in a scandalous, much-publicized divorce. Jane had fallen in love with a dashing Austrian diplomat, and she did not care what the world thought.

After the divorce, every door in London was closed to Jane, and so she lived abroad, where she was wooed or wedded by some of the most fascinating men in Europe: among them a duke, an Albanian bandit chief, and King Ludwig I of Bavaria. She was an intrepid traveler and finally found her happiness in Arabia, where she married a sheik and divided her time between the oasis of Damascus and the hard life of Bedouin nomads."

Sounds a bit over the top doesn't it? Go read Jane Digby's wikipedia page - she did indeed lead a life that was amazing. (Also from what I've read so far, the writing in the book isn't as over the top/Romancelandia-ish as the jacket blurb.) From that much you'll understand why Jane Digby's been on my To Read More About list.

Now let's go back to Rebel Heart's author, Mary S. Lovell, discussing the contemporary biographies of Digby, and her own research in the prologue - specifically trying to find out more about Jane Digby's diaries:

p. 15: "...several subsequent biographers...declared that the diaries were lost. Since [Digby's first biographer] E. M. Oddie had quoted from the diaries hardly at all, this seemed especially tragic. So I set out to discover what had happened to them in order to learn about Jane through her own voice. I also decided to try to locate the diaries and correspondence of people who met or were friends with Jane, not only to see what more could be learned about her, but to give a three-dimensional perspective to her story.

I contacted Lord Digby, a direct descendant of Jane's brother, Edward, and in April 1993 at his invitation I drove down to Minterne House in Dorset one morning to see his collection of Jane's water-colours. Over lunch I told him about my work and, after a pause, he looked at me, seemed to come to a decision, and said, 'Um, we do have Jane's diaries here. But we've never shown them to anyone.'

Within a short time I was seated at a writing table with objects that had once been Jane's; her notebooks and sketchbooks, and her diaries which covered more than three decades, principally those years she spent in the desert. All would need to be transcribed and indexed to be easily accessible. Some sections writing in pencil were badly faded; many entries were written in code and there were passages written in French and Arabic. I realized too that the code, once broken, might translate into any of the languages that Jane spoke; it would be a mammoth task. Five days later I was due to leave for Syria to research Jane's life there. I asked to be allowed to return to Minterne at some date in the future for a very long time.

Somewhere there must be a patron saint of biographers, to whom I owe much."

I can only imagine how exciting it must have been to sit at that desk, looking at all those primary sources that historians hadn't ever seen.

Glance again at Jane Digby's biography and realize how many languages the woman spoke, and you'll see the staggering amount of work Lovell had with all those papers. Not to mention cracking the code! She admits that after all her research she easily had enough content for many thousands of pages:

p 16: "However the job of a biographer is not merely to unearth and assemble facts; one must also dissect, compare, confirm and analyse; then hone the result in order to present to the reader a historically accurate, digestible and, I hope, enjoyable account of the subject."

That was all it took - the story of the unseen primary sources and secret code, plus the part admitting that she had more than enough material (and she edited it down!) - I'm in. I have the feeling I'm going to wish the book was longer than 370 pages - I'm especially interested to see if she'll discuss how those coded bits were translated.